A pilot is a marine navigation expert with extensive local knowledge who temporarily joins the crew of a ship to safely navigate said ship between two locations on the St. Lawrence River.
The term PILOT comes from the Italian pilota, from the Greek πηδον pêdon meaning “rudder”, “flat oar”.

Over the past century, the evolution of electronic equipment on board ships has made navigation more accurate and safer. Despite this, marine pilots are still essential. But if pilots are still necessary, have their tasks evolved? 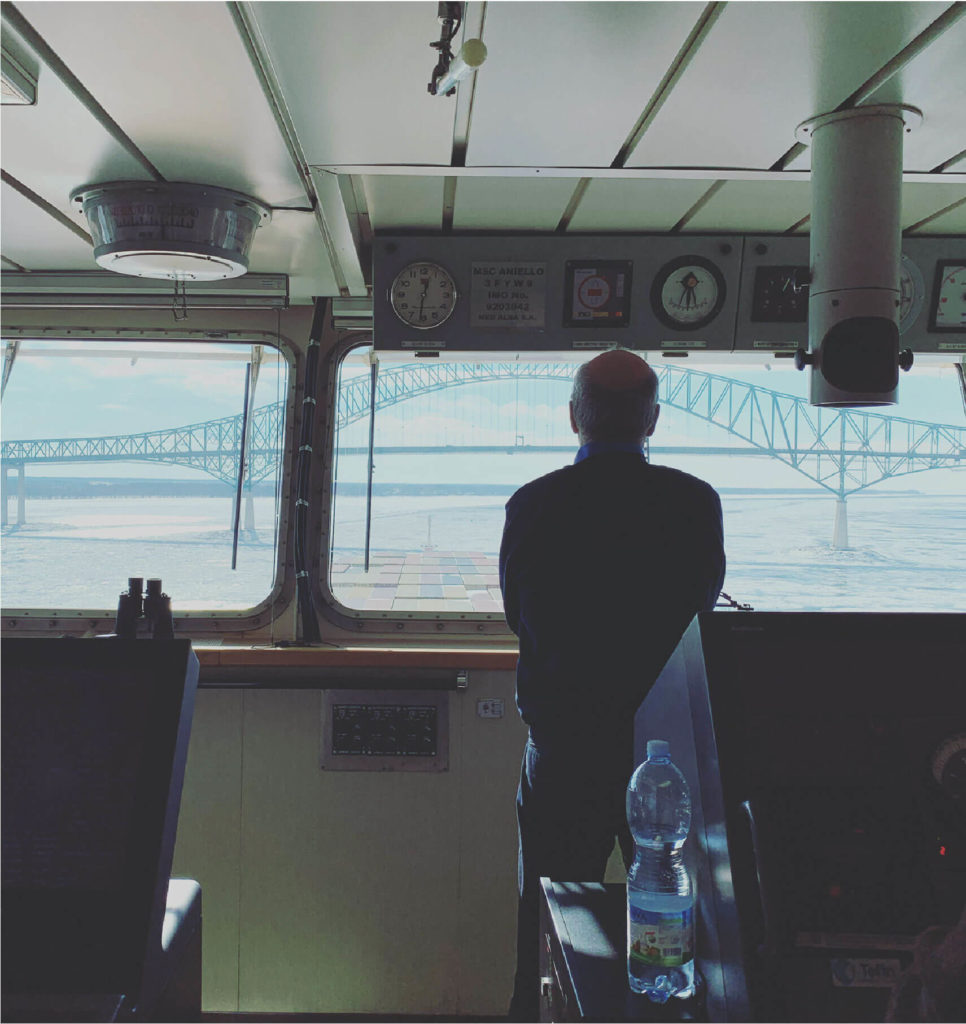 Pilot at work in the wheelhouse.
Coll. CPSLC 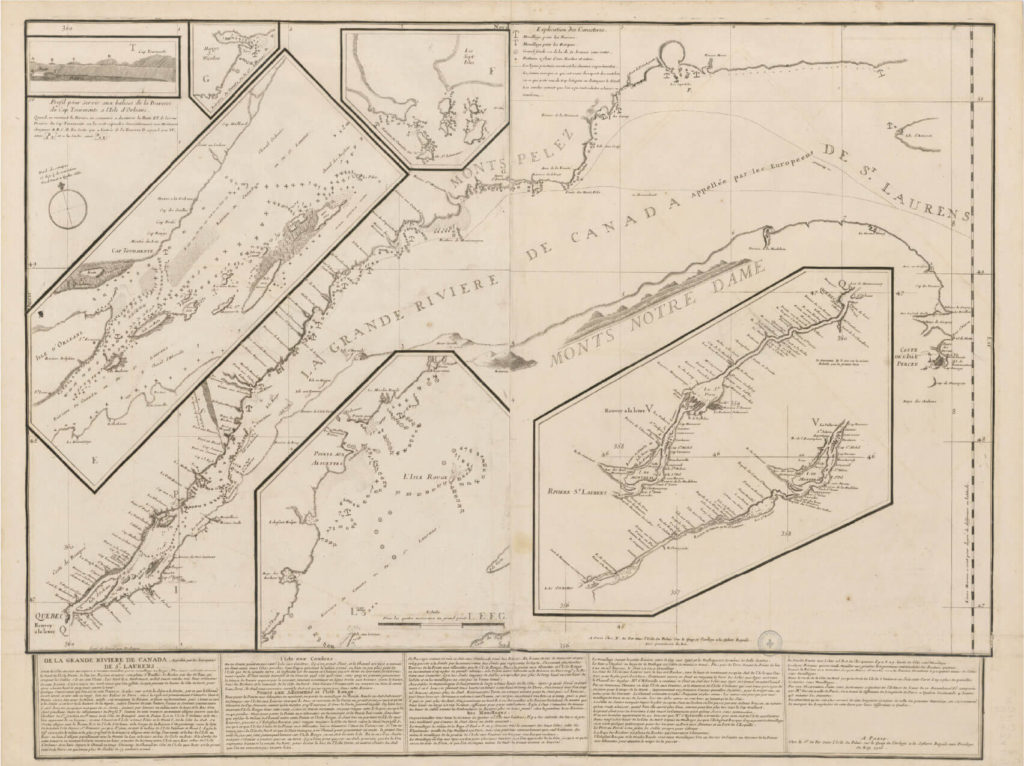 There are pilots on the St. Lawrence River, but also on many rivers where navigation is complicated. Pilots are not only essential in Quebec. In fact, an estimated 8,500 maritime pilots from 55 countries are members of the International Maritime Pilots Association. Of these, 440 are Canadian and belong to the Canadian Marine Pilots’ Association (CMPA) which was created in 1966. Its mission is: “To foster public awareness of the role of marine pilots in protecting public safety and the environment, and to work with other marine stakeholders to ensure a vibrant and healthy marine sector.”

Navigating on the St. Lawrence requires very specific knowledge. This type of navigation holds a great deal of risk that only an expert, the pilot, is able to minimize. However, although he stands in the wheelhouse, the pilot is not in command of the vessel and is not a member of the crew. Nevertheless, he is in charge of it, i.e., he controls the course and the speed.

What Is a Nautical Mile?

The nautical mile is a unit of measurement for length used in marine navigation and is equal to 1,852 metres. 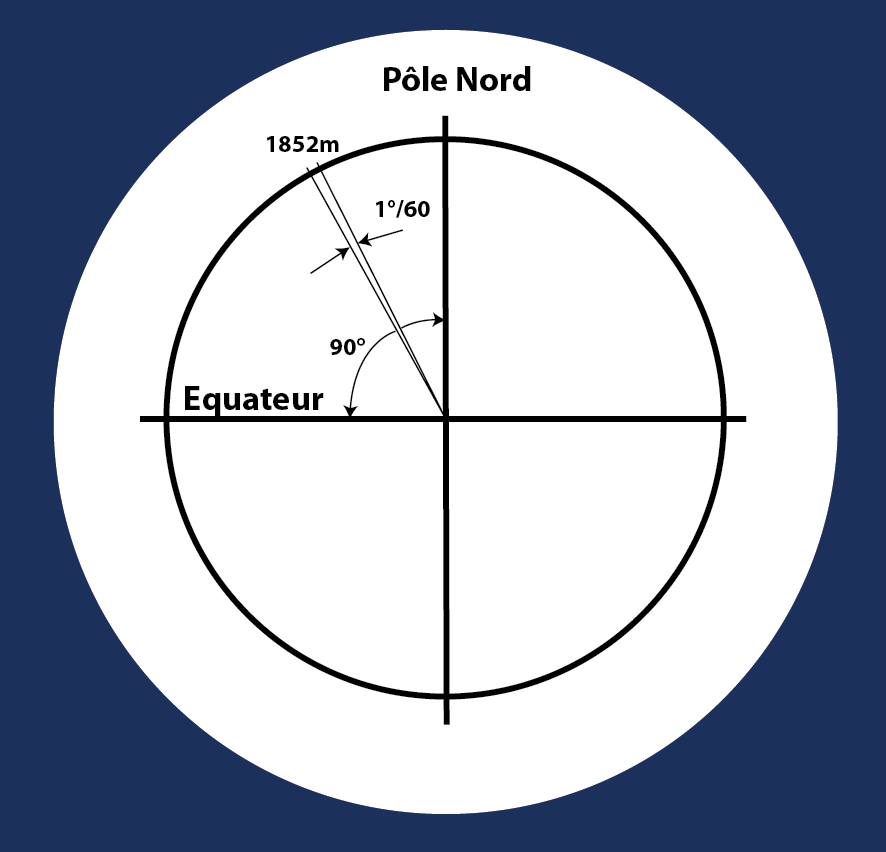 Ports and anchorages located in the Quebec to Montreal pilotage district

During their mission, pilots have tremendous responsibilities. Navigational errors must be kept to a minimum, that is to say non-existent.

In 1971, the Pilotage Act stipulated that the pilot must be the person who has the conduct of the ship. However, if he is not replacing the captain, what is his role in the wheelhouse?

Each Pilot Has His Stretch of the River

Each pilot is specifically trained for the sector in which he is called to navigate. In concrete terms, he is an expert on that part of the river. Better than anyone, he knows the currents and their strength, the ice movement, the tides, the obstructions, and all the other particularities that make navigation unusual and perilous on the St. Lawrence.

When boarding the ship, the pilot must analyze a multitude of information: the size of the ship, its draft, its cargo, the density of maritime traffic, weather conditions, and of course, the destination. This data is essential to guide decision-making and risk management.

One Ship, One Route… But Several Pilots! 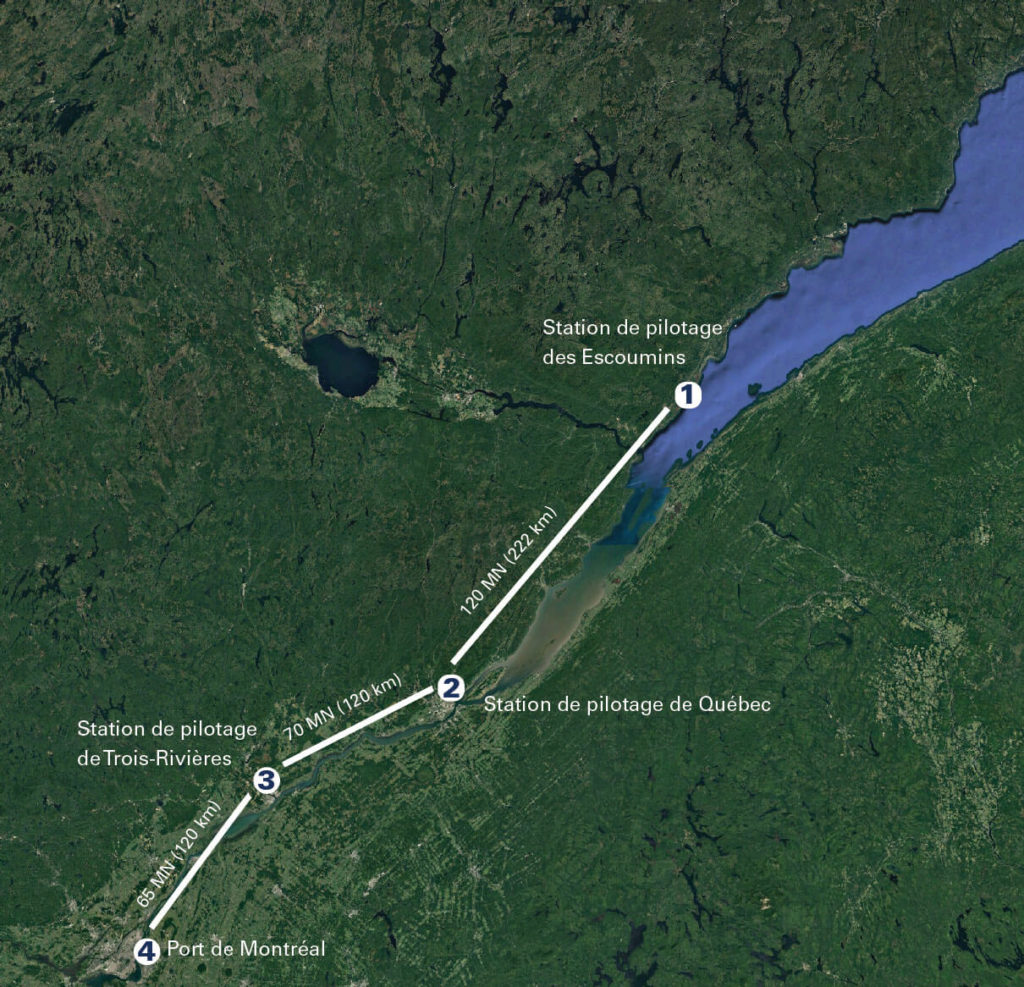 Is it Mandatory to Have a Pilot on Board?

Why is it necessary for a local marine pilot to board a merchant ship transiting the river? Although very competent, international captains and crew members do not have all the local knowledge required to safely navigate in all the places they visit. Furthermore, French is the language spoken when communicating with tugs and the MCTS (Marine Communications and Traffic Services). Unfortunately, most foreigners are not fluent in the language of Molière. 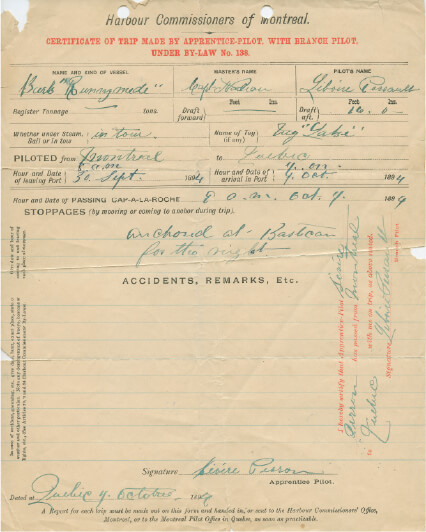 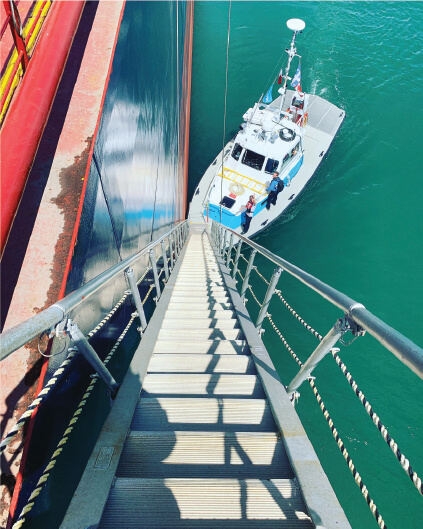 The pilot boat is specifically designed and used for pilot transfers. This transfer can be done when the ship is underway, hence in motion, or when it is at anchor. When sea or ice conditions are difficult, a tug can also be used for this operation. For the sector between Quebec City and Montreal, Ocean Group manages the pilot transfers.

There are even pilots whose job is to ensure the movement of ships within the limits of a port, notably the Port of Montreal. These are called docking pilots. There are five such pilots with the Corporation of St. Lawrence Pilots, and they joined this organization in 2011. 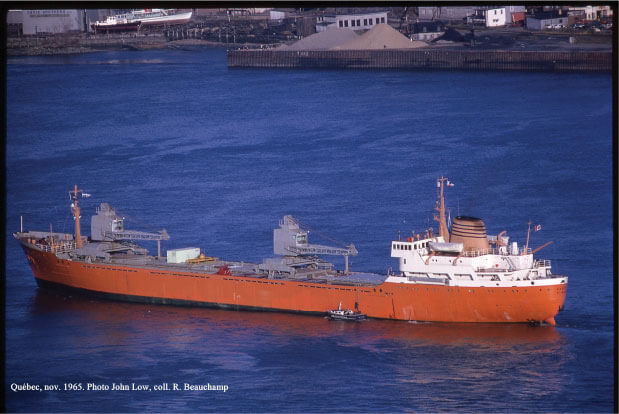 Because of the considerable responsibilities it entails, pilotage is the maritime industry’s highest specialization in the field of navigation. After four years studying navigation in a specialized school, for example at the Institut Maritime du Québec in Rimouski, seamen must

1. sail for five years as officers, until they obtain a captain’s certificate.

2. apply as an apprentice pilot, complete a two-year training course, and complete 300 missions with a certified pilot. 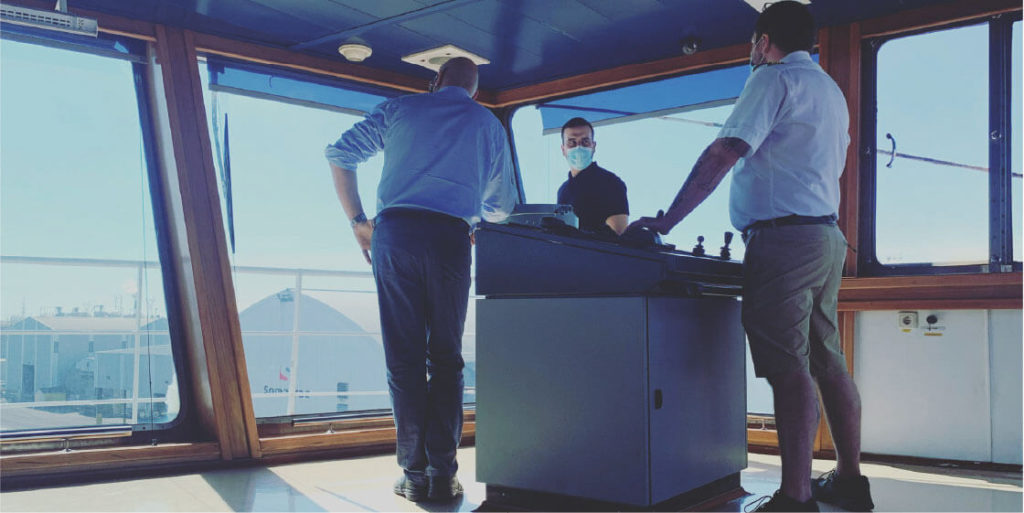 Apprentice and pilot at work in the wheelhouse.
Coll. CPSLC

The hundreds of transits during which the apprentice accompanies a pilot allow him to learn the practical side of the profession that would be impossible to assimilate on a school bench or in a book. During these 24 months, the apprentice assists dozens of various pilots, each one sharing some of his expertise. At first, the apprentice is just observing. Gradually, he takes over from the pilot to become autonomous in manoeuvring and piloting at the end of the two-year training.

One of the tests of the written exam consists in drawing the nautical charts from memory to reproduce as accurately as possible the apprentice pilot’s navigation sector. As for the oral exam, which lasts a full day, the apprentice is quizzed on various subjects by a panel of examiners.

All in all, it takes some 15 years of experience and several training courses, including eight years as a pilot, to be able to successfully conduct ships of all tonnages and cargoes under any conditions. In comparative terms, this is the same time it takes to become a medical specialist!

Simulation is used to help pilots master all the technical and technological aspects of their profession. Two types of simulators are used during initial training and throughout their career to maintain their skills.

This simulator uses high-resolution screens linked to a replica of a ship’s bridge. A powerful computer uses a database to create realistic scenarios. This simulator is mainly used to practise very realistically the docking and approach manoeuvres in harbours.

Seated in 1:25 scale ship models, the pilot practises common manoeuvres or emergency situations. Docks, tugs, currents, and winds can be recreated to scale to make the exercise as realistic as possible. 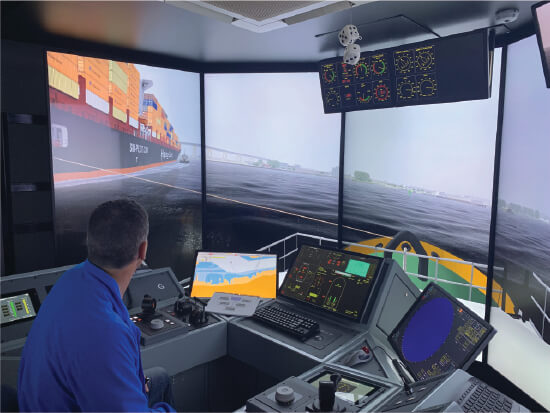 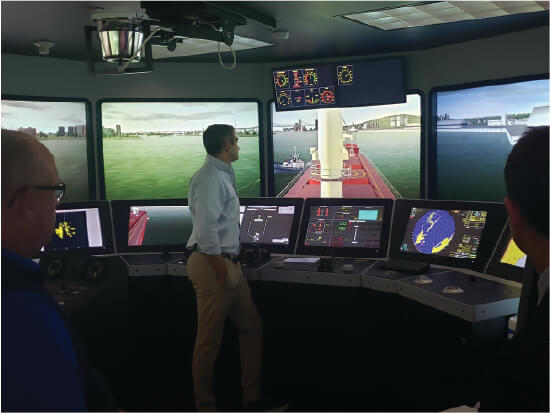 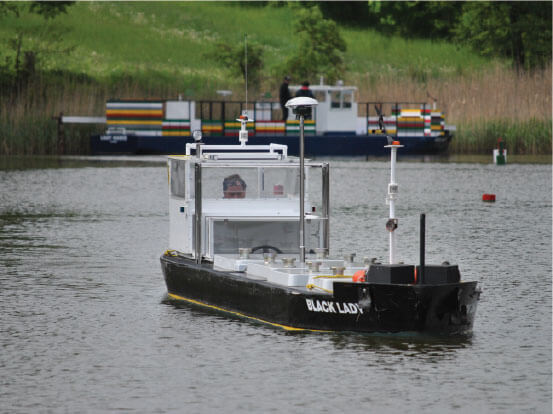 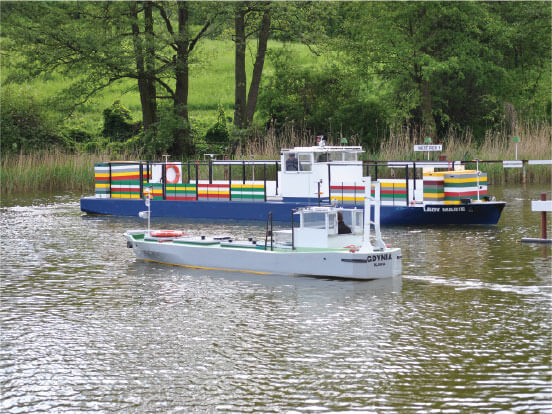 On May 24, 1944, the school formerly known as the École de marine de Rimouski was inaugurated, under the auspices of the Corporation du Séminaire Saint-Germain de Rimouski.

In September of the same year, the first cohort of students arrived at the school under the direction of Jean Bernatchez, member of the Royal Canadian Navy. Since its inception, the school has offered training leading to three distinct certifications. Navigation training leads to the captain, first officer, and second officer Master Mariner certificates. The second training is in the field of marine mechanics. It is a preparatory program for the fourth to first-class engineer’s certificates. Finally, there is a training program to prepare candidates for their first coastal service certificate. It is intended for those who have already spent time at sea.

The institution’s reputation is well established, and it has become a reference on the international scene. In fact, many international students attend its classes and professionals from the maritime world come to hone their knowledge.

< Sailing under the sun, returning in a storm

The Maritime Tradition of Pilotage >