Riding on the Wind

Author Antoine Blondain wrote that at sea, the greatest danger is land. It is clear that other parameters are added, with economic profitability at the helm.

The St. Lawrence River is the gateway to North America and is at the heart of Quebec and Canada’s historical, demographic, and economic development. As a geostrategic unit for commercial, logistical, military, and transportation purposes, it has been of vital importance for centuries. Did the First Nations not use it to ensure their survival, their travel, and the establishment of their commercial links? Did English ships not take advantage of this waterway to reach the shores of Quebec? Not to mention that the river carried the hopes of hundreds of thousands of immigrants arriving from the Old Continent in search of a better life. For centuries, it was the livelihood of as many loggers, fishermen, and merchants transporting a thousand and one cargoes on the schooners sailing along its shores.

Today, over 110 million tonnes of various goods are traded annually on the St. Lawrence, reflecting an economy where competition and profit are important issues. Shipowners are keen on profitability. As a result, ships are getting bigger and their cargoes heavier. 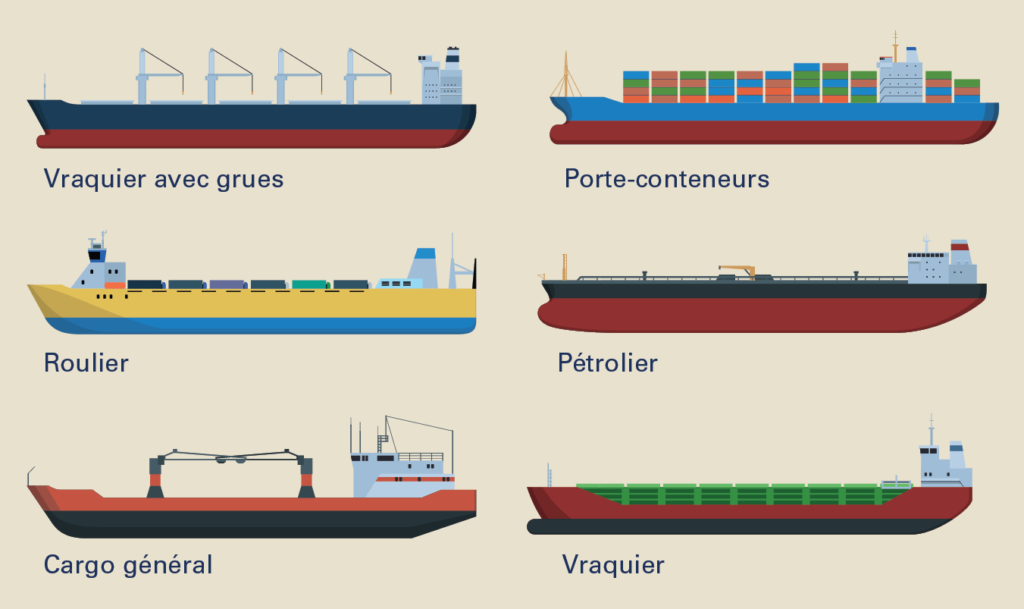 Various types of vessels frequently transit the pilotage sector between Quebec City and Montreal. They are illustrated here. Will you be able to recognize them the next time they pass? 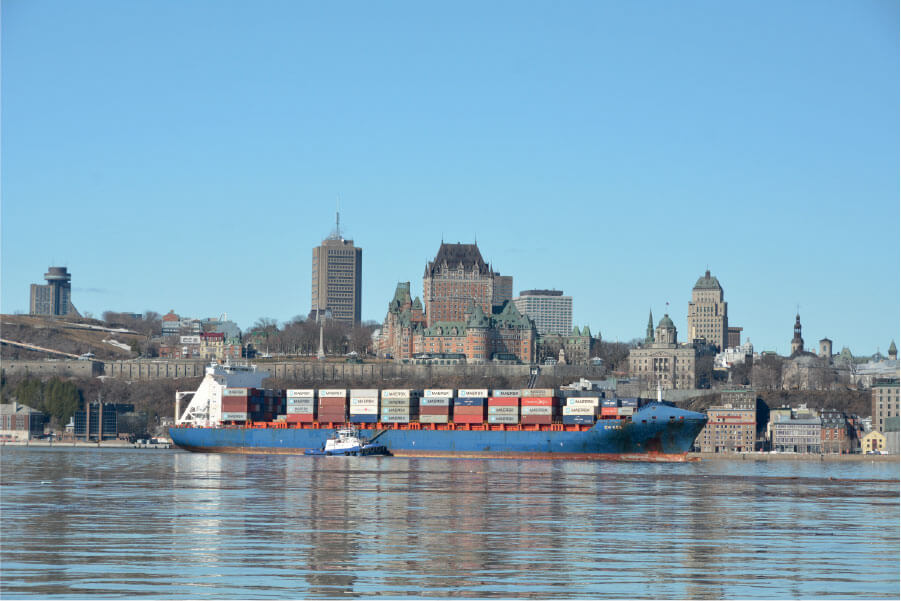 CPSLC pilots are proud to contribute to the economic growth that shipping provides. It is an honour to be an integral part of this well-oiled logistics chain. Almost 80% of all essential and consumer goods are delivered by ship. And, during the last couple of difficult years, pilots have acted as essential workers helping to bring food, medicine, and medical equipment to Canadians.

From 2020 to 2021, CPSLC pilots boarded ships between Quebec City and Montreal 28,700 times. On average, a pilot boards a ship every 40 minutes to perform a pilotage mission.

How does the crew install a pilot ladder Porte-conteneurs OOC 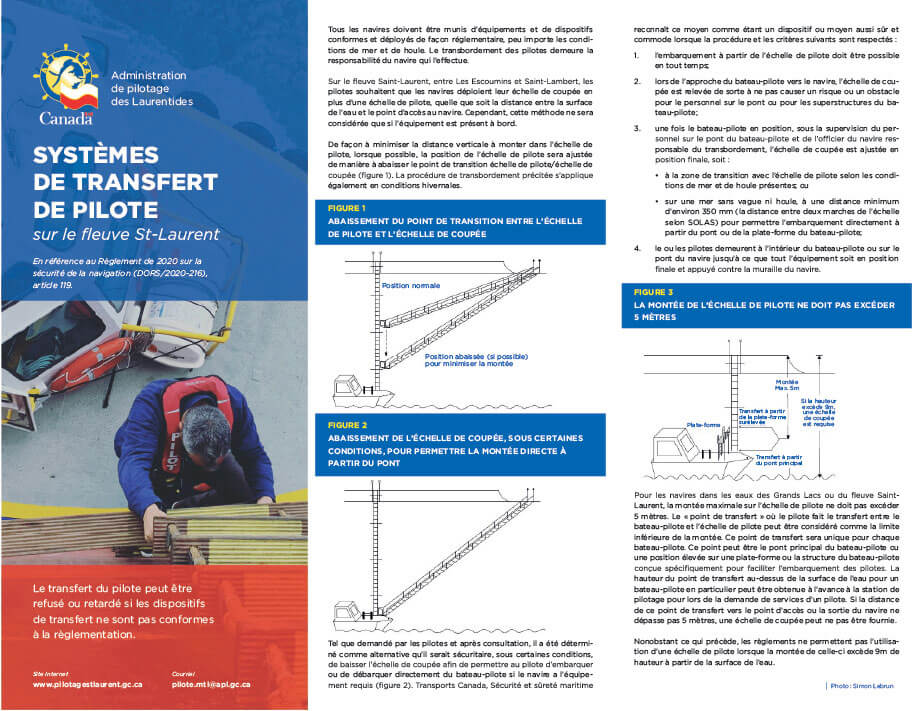 Moving at Full Speed on an Economic Current 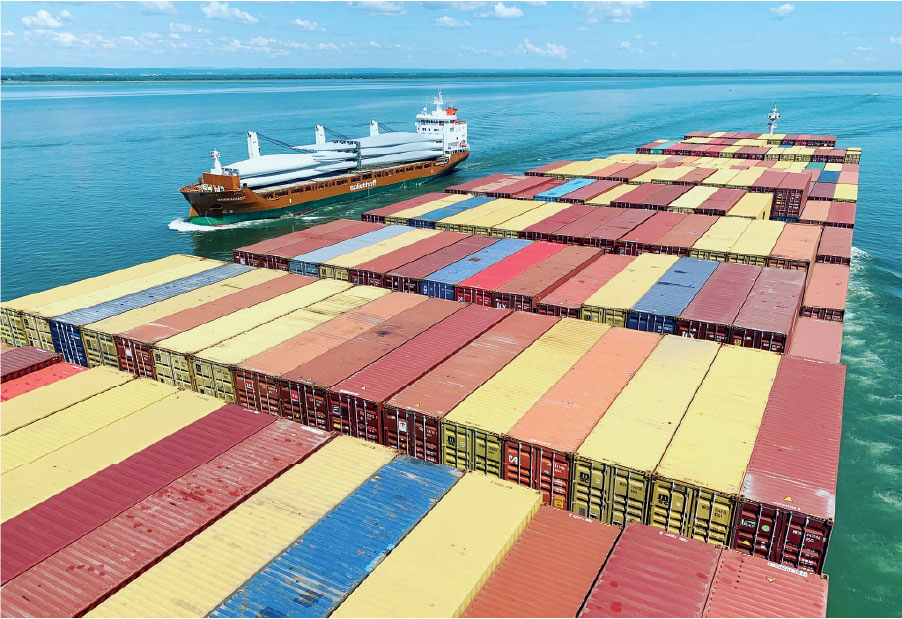 In the 19th century, the great wind of change took hold and blew away the sails. The foresail and mainsail were traded in for new technologies. Henceforth, steamboats crossed paths on an increasingly busy river. In 1882, the number of steamboats heading for Montreal exceeded the number of sail boats!

Every year, thousands of ships travel the St. Lawrence: bulk carriers, oil tankers, container ships, cruise ships, ferries, fishing boats, and pleasure craft. The heavier the ship, the greater its draft and the closer it is to the seabed. Hence the importance of knowing the tides and water levels!

What is the draft of a ship? It is the depth of the ship under the surface of the water. In many cases, pilots have to slow down, coordinate passages, and even anchor while waiting for the next tide.

… Getting Bigger and Bigger

For several years now, major changes have also been made in the design of ships. The hull is getting longer and wider. The wheelhouse is now located about 100 metres from the bow, which creates a significant blind spot at the front of the vessel and restricts the pilot’s visibility in the wheelhouse (see sketch).

In 2013, the Port of Montreal is allowing post-Panamax ships which are up to 44 metres wide to enter the port. It is increasingly common to see these behemoths on the river. However, encounters between two post-Panamax must be done carefully and follow a very precise procedure. What’s more, the width of the channel is often shorter than the length of the vessels, which measure approximately 300 metres. 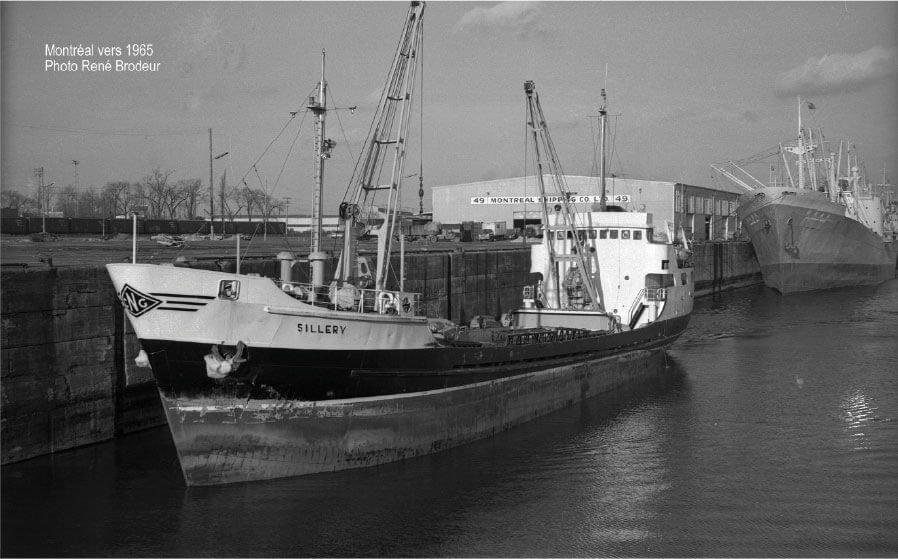 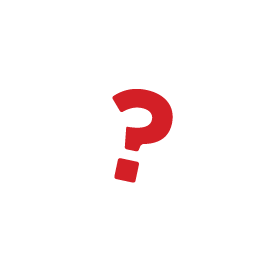 What is the difference between the stern and the bow of a ship?
The stern is the back of the ship. The bow, the front! 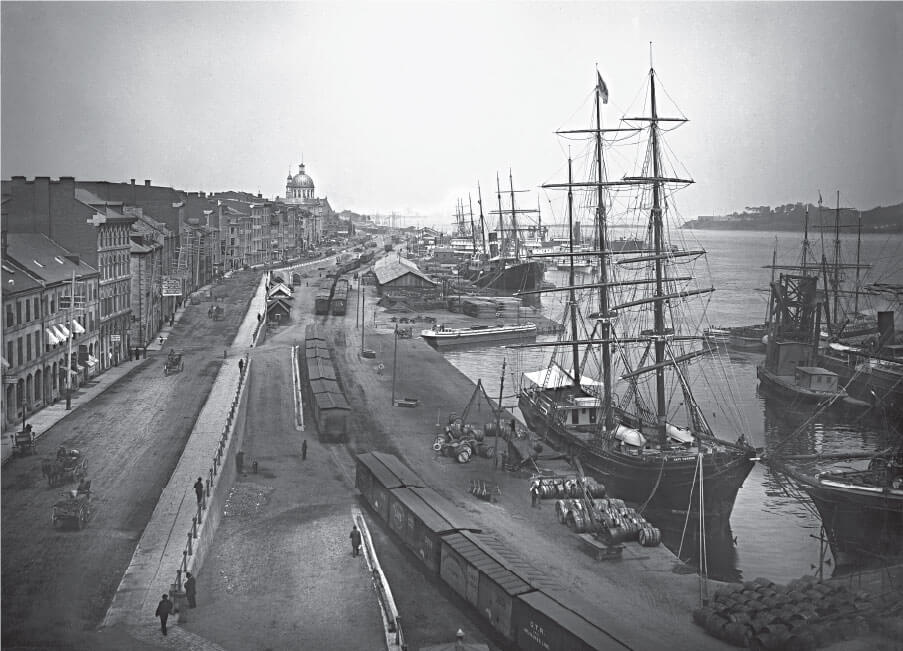 Behemoths on the River

Some of the ships that visit the waters of the St. Lawrence are veritable behemoths measuring over 270 metres in length by 45 metres in width (post-Panamax ships)! 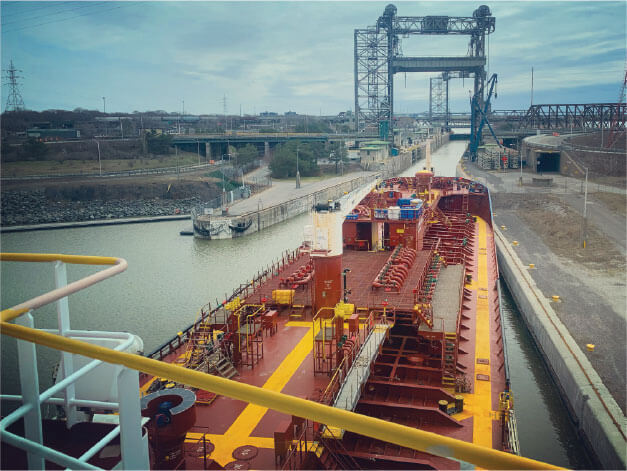 A Unique Waterway, a Complex Network

The Great Lakes St. Lawrence Seaway System spans 3,700 km of navigable waterway from the Atlantic Ocean to the Canadian Great Lakes. In all, 15 locks (13 Canadian and 2 U.S.) provide access to the heart of North America and support vital commercial development. The official opening of the St. Lawrence Seaway took place on June 26, 1959.

A Trade Route That Drives Change

With the creation of this waterway, the spectrum of commercial possibilities was broadened, and economic profitability was multiplied. The farther into the heart of America, the more profitable trade becomes as new markets open up.

As a result, the number of ships that make their way up the St. Lawrence River to Montreal is becoming increasingly significant. There is no doubt that the Seaway’s opening has had an impact on the work of pilots manoeuvring in the area between Quebec City and Montreal, and has from the beginning. Also, it is important to keep in mind that it is complex to navigate in these waters because of the narrowness of the channel, among other reasons.

Montreal has also become a compulsory route for anyone wishing to travel to the Great Lakes. The sector of the Port of Montreal is thus a pivotal location where ships cross and dock. For pilotage, it is also a place for pilot transfers for ships wishing to continue inland. 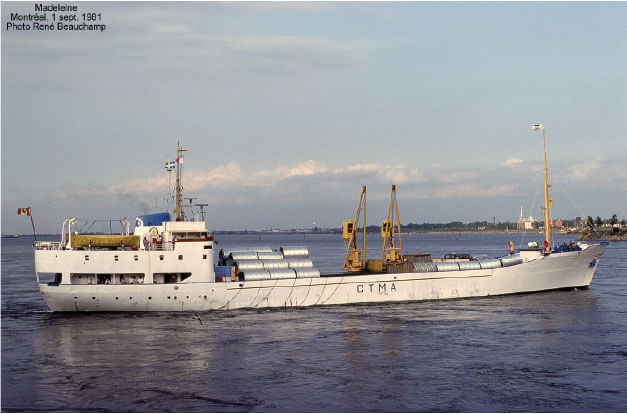 The ship Madeleine in the Montreal sector, 1981.
Coll. René Beauchamp 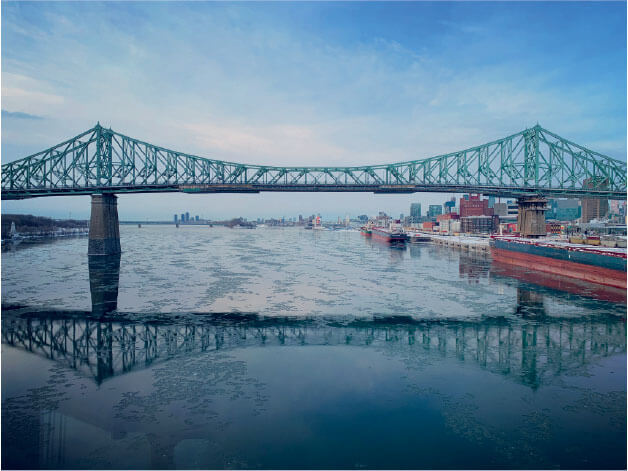 Profitability and Security: an Impossible Combination? 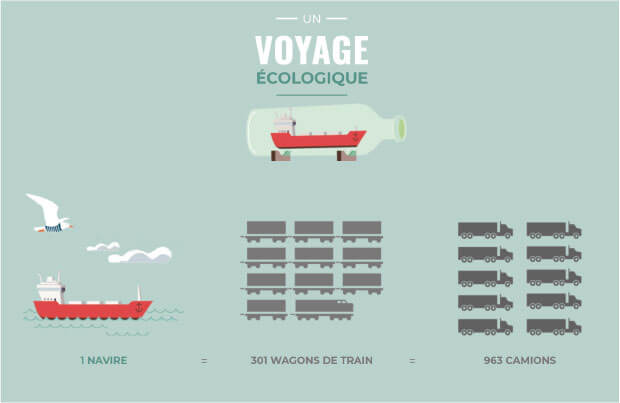 Compared to other means of transporting goods, ships are still the most environmentally friendly.
Source: St. Lawrence Economic Development Council

The “Mighty River”, as it was named by director Frédéric Back, is therefore essential to development. According to the St. Lawrence Economic Development Council (SODES), it contributes $2.3 billion a year to the gross domestic product (GDP). However, this prosperity comes at a cost and is not without risk. More ships means a greater risk of accidents.

However, economic development cannot come at the expense of maritime safety. The good news is that one does not preclude the other! Sound risk management, a thorough understanding of the environment and how to protect it, a long-term vision for a sustainable economy, and a commitment to responsible and intelligent navigation are key to maintaining this momentum. This is where the pilot’s role takes on its full meaning: as an independent industry expert, he or she contributes to this balance.

For many years now, initiatives and sustained efforts have been undertaken to reconcile the environment and the economy. Merchant shipping and marine transportation are part of the solution as these few examples testify.

For the past two decades, pilots of the Corporation des pilotes du Saint-Laurent central have been applying voluntary speed limits to reduce the size and strength of waves created by passing ships. The objective is to reduce shoreline erosion and minimize the impact of ship passage on shoreline properties.

In certain high-water situations, mandatory speed limits may also be imposed by the Coast Guard. In these circumstances, pilots comply with all of these measures.

In a world heavily governed by economic prosperity, this is an everyday task and consideration. There are many challenges and there is no doubt that vigilance is a valuable ally. Whether to port or to starboard, caution is required when considering maritime transportation on the St. Lawrence River.

What are the real environmental issues? Are the risks real and if so, to what extent? 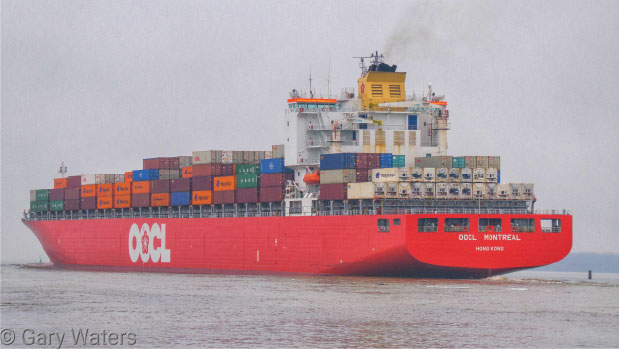 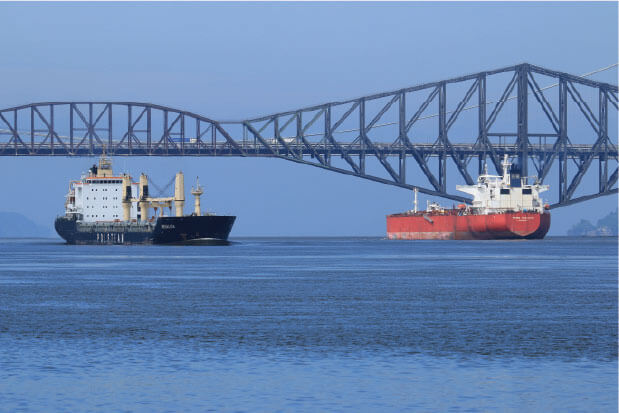 Crossing of an oil tanker and a bulk carrier.
Coll. CPSLC

Sometimes risk studies are required. This is the case, for example, for ships that are not of a so-called standard size and that wish to navigate the river. This is when the relevant pilots’ associations as well as stakeholders such as port authorities, pilotage authorities, and the Canadian Coast Guard join forces to conduct a study on the risks, the impact on marine traffic, and the safety margin when crossing with this vessel.